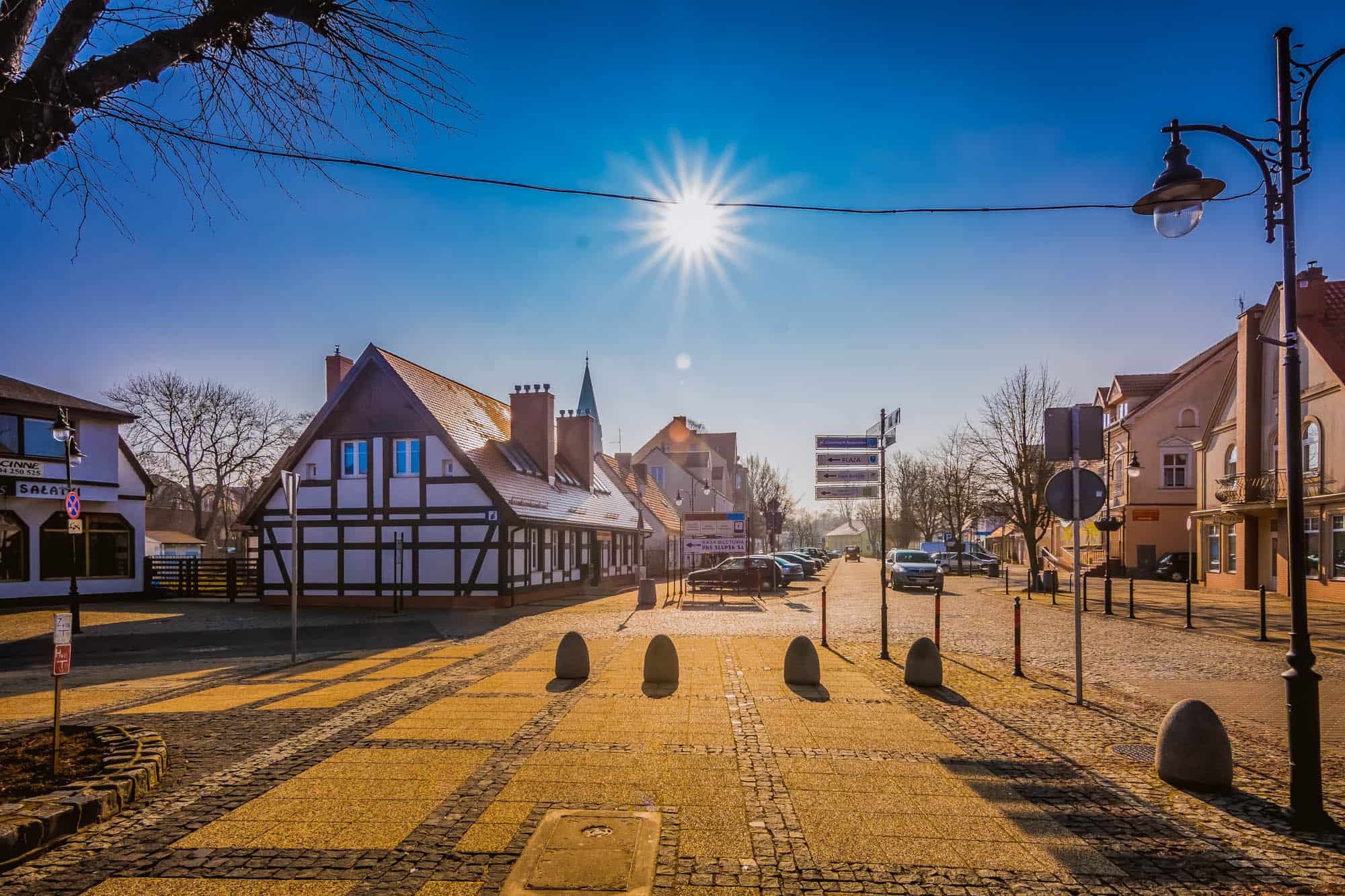 In the early Middle Ages, Ustka was a Kashubian fishing settlement belonging to the Słupsk castellany and shared its historical fate with the nearby Słupsk. At present, the climate of the old port settlement can still be found among the fishermen’s houses in the quarter that runs along the streets: Marynarki Polskiej and Kosynierów. reserved here is also the layout of the streets of the medieval village, and due to its historical value, it is under conservation protection. The first organized efforts aimed at revitalizing the area of the Old Fishing Settlement were undertaken in 2005, when the Ustka City Council adopted the Local Revitalization Program for Ustka Commune. From that point forward, the city began to revitalize this area, the aim of which is to restore it to its former glory and to preserve the timeless beauty of old, half-timbered fisherman cottages.

Church of the Most Holy Savior

The Neo-Gothic building was erected in the years 1885–1888 on the outskirts of the settlement. Today it is situated at the heart of Ustka. During the service, you can hear historic organs, one of the few preserved works by the organmaster Christian Friedrich Voelkner. Inside the temple, there are 17th-century votive paintings commemorating the catastrophe of 1672, during which the Ustka sailing ship sank with its entire crew. The church is adorned with numerous stained-glass windows, especially in summer, when the penetrating rays of sunlight form unique light effects.

Town Hall – a former school. In 1911, a new building was erected in place of the old school near the church. It was raised according to a design of Friedrich Engelbrecht, a construction councilor from Bydgoszcz, who would often come to visit the Ustka swimming zone. This characteristic building served as a school until 2004, with a little break when a military hospital was established there in 1944. At present, it is the seat of the Ustka Municipal Office.

Established in 1911, located right on the sea, the Institute for Natural Medicine has been Ustka’s showpiece for many years – it accentuated the spa nature of the town. Out-of-town spa visitors together with the local residents benefited from numerous treatments to treat cardiovascular and respiratory diseases and rheumatic conditions. In its offer, the Institute for Natural Medicine features various hot baths: therapeutic mud baths, brine baths, sulfur baths. Rehabilitation massages were also performed here. 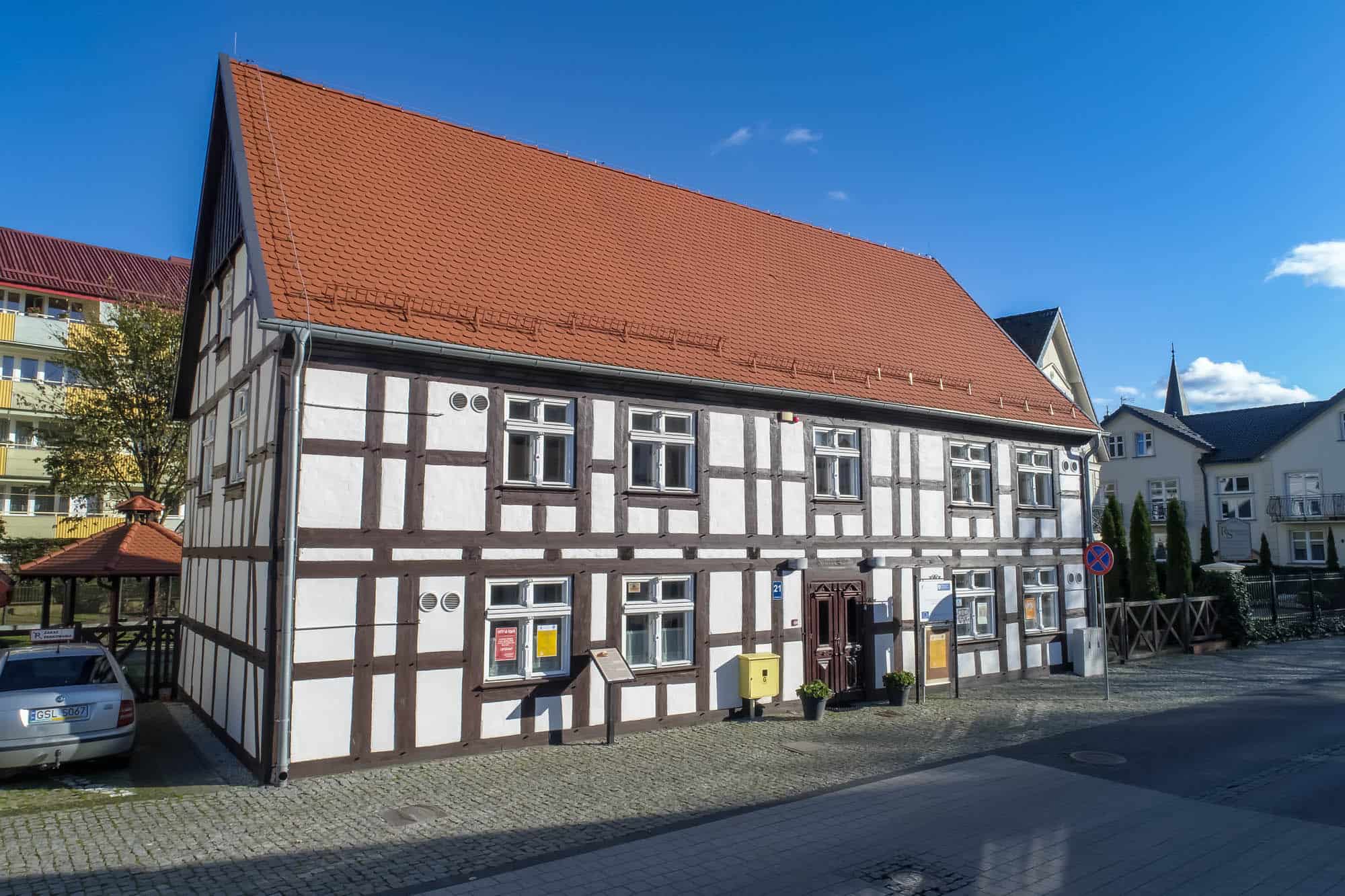 A fine example of half-timbered construction is the preserved Captain Hasse’s House. It was established in 1804 – as evidenced by the inscription “18 P.H. 04”, which has been engraved on a wooden beam above the entrance doors. Interestingly, the inscription was revealed only during restoration works in 2006. Before the war there was a hotel here, today it is the seat of the Baltic Sea Cultural Center. Inside the building, in the restored rooms, you can see various temporary exhibitions. It is also the place of interesting cultural presentations. 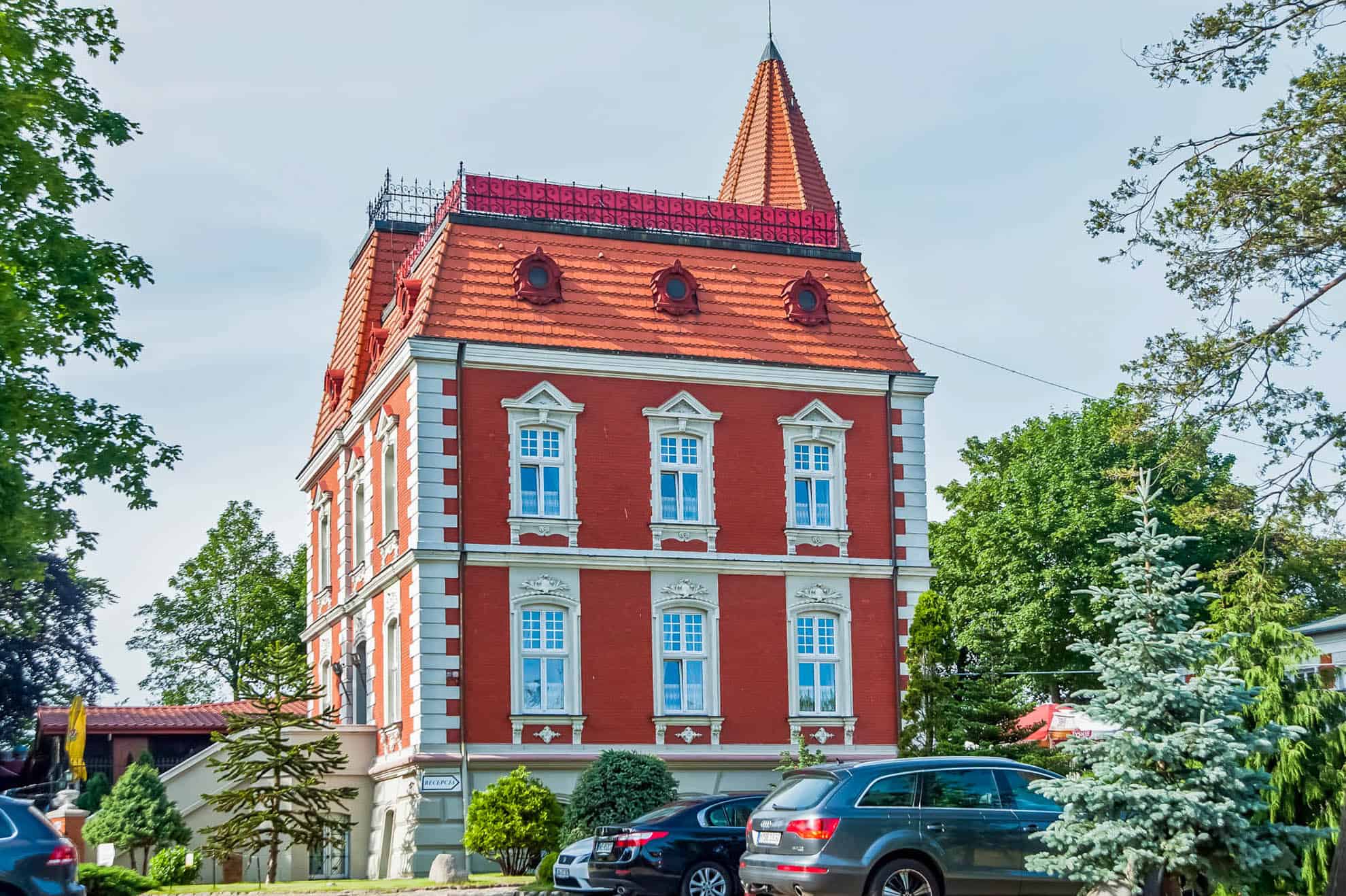 Villa Red, a former villa of Westphal, the most successful entrepreneur in Słupsk. Its origin dates back to 1886 – this date is placed above the gate of the former stable built next to the main building. Currently, Villa Red offers rental of a stylish apartment or room where you can enjoy the charm of a bygone era.

The Third Pier in Ustka 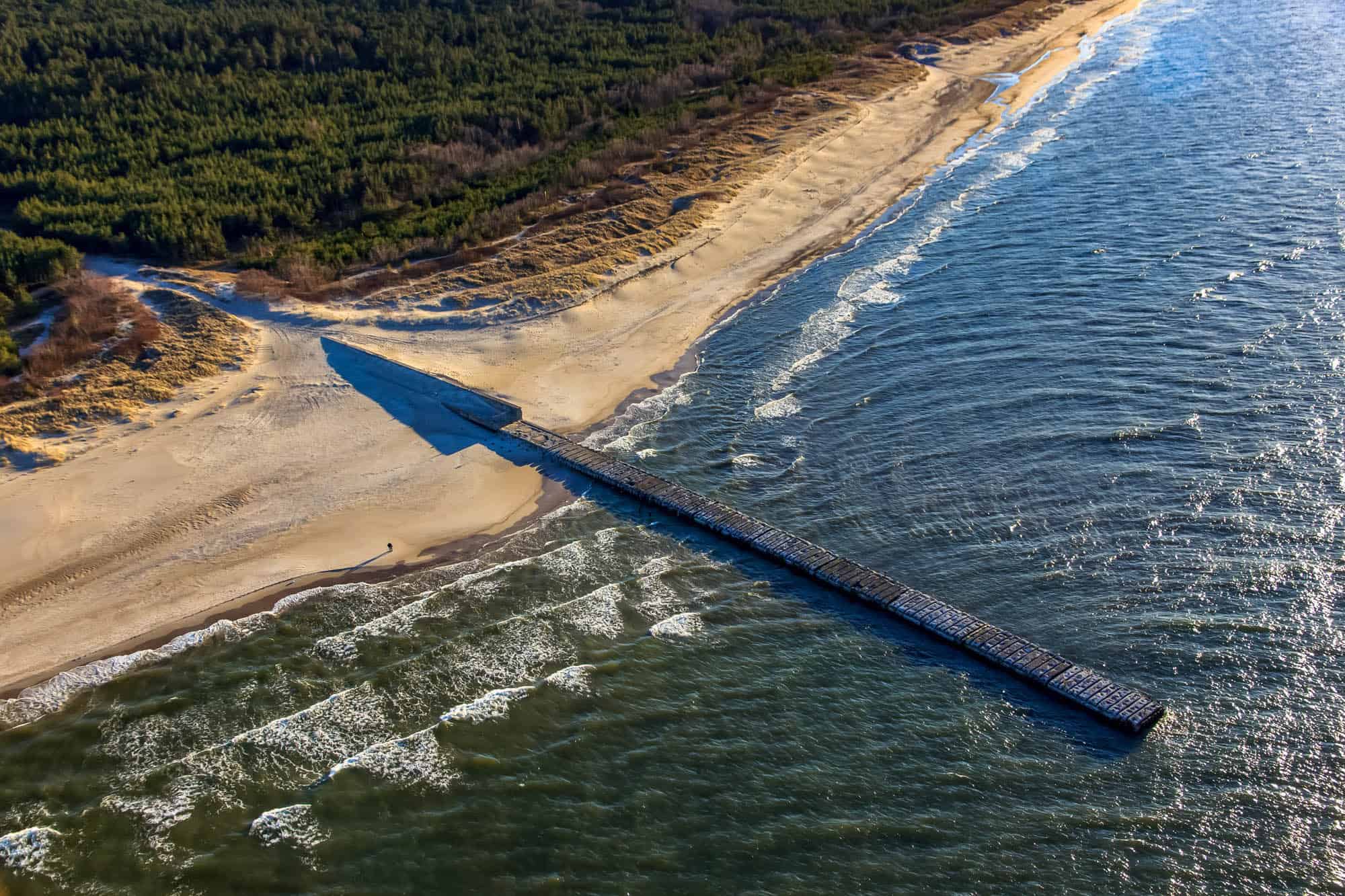 The Third Pier, or the west breakwater was one of the flagship Nazi investments in the then Provinz Pommern. There were 800 German workers employed at the construction site. According to the information in the book “Fortress Ustka”, in March 1939, the press informed about a huge 60-meter-long scaffolding for piledriving under the pier into the seabed. Hundreds of these piles were driven here until the outbreak of the war. The entire structure was to rest on piles up to a depth of 10 meters, where they were to be replaced with reinforced concrete floating caissons, sunk into the bottom and filled with concrete. The construction was to cost 60 million marks, of which 15 million marks were to be allocated to the construction of the double-track rail lines Ustka- Sławno-Białogard -Berlin. Had it not been for World War II, the great harbor terminal in Ustka would have probably been opened in 1941. The decision on erecting the structure was made in 1937. The terminal was to autonomize communication between the Reich and East Prussia from Poland. The construction was never completed. Today, this reinforced concrete structure entering the sea puzzles many tourists; most are unaware that cruisers and oil tankers fraught with cannons were supposed to be based here. 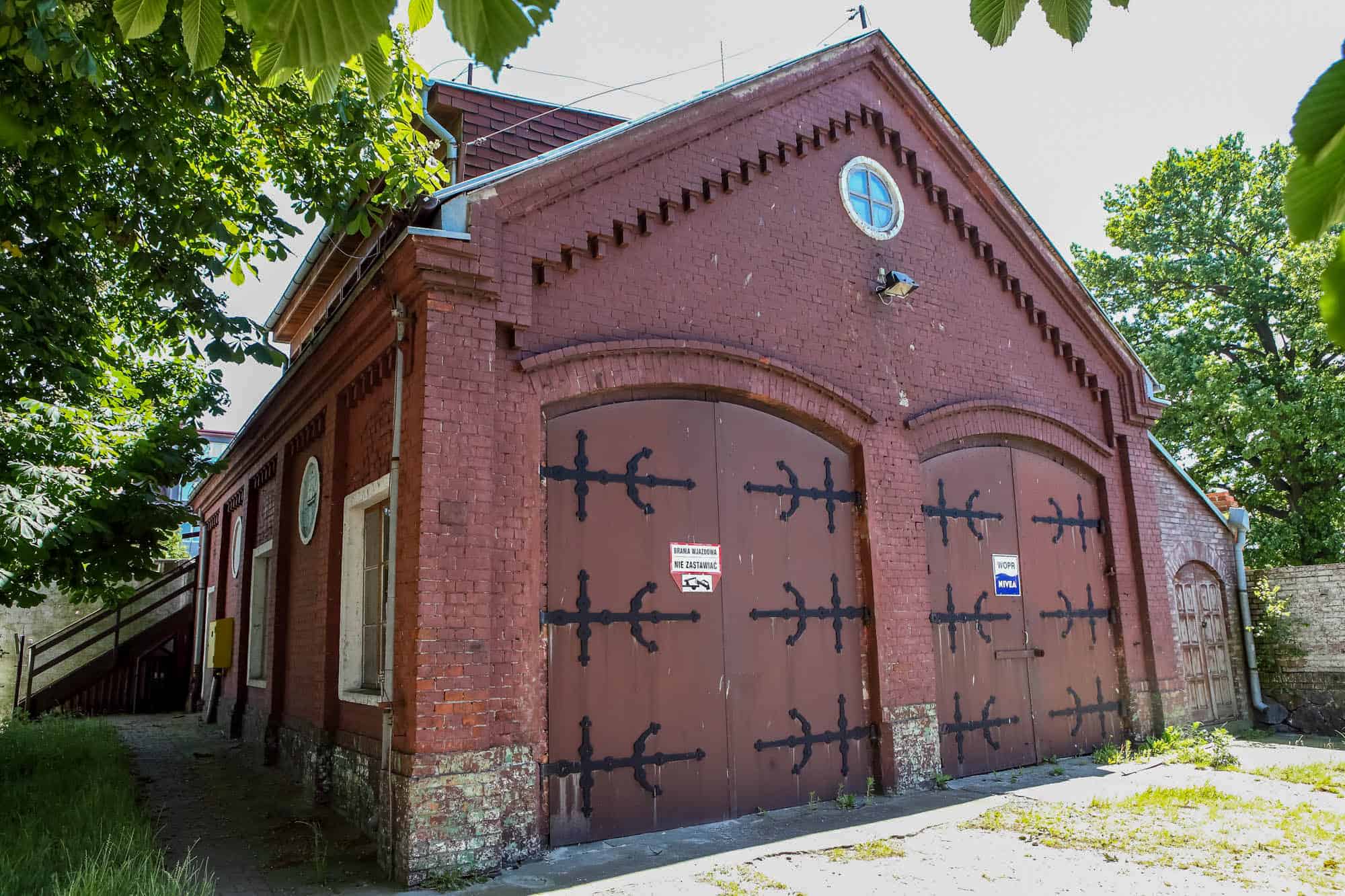 The maritime rescue station was initially located in a wooden shed built in 1867. Over time, it was replaced with a red brick building, hence the name “Red Shed”. The rescue base was equipped with a horse-drawn cart with special wheels that facilitated riding on the marshy sand on the beach. The rescuers used a rowing boat and a rocket launcher to fire ropes at the drowning survivors. By the end of World War II, over 160 people had been saved. The old coat of arms of Ustka has been preserved on the side wall of the building.

A 19th-century manor house, located 50 meters from the promenade, at the corner of Chopin and Kopernika streets. It is one of the most interesting and best-preserved buildings in Ustka, entered in the register of historic monuments. Right after the war, it became the headquarters of the Houses of Creative Work of the Association of Polish Artists and Designers Board. The manor house is surrounded by a garden and the Art Nouveau interior design creates a unique atmosphere. Particular attention should be given to wrought-iron balustrade and fencing, stained glass windows in the pinnacle or inlaid veranda ceiling. The dining hall is located in the former stable. Houses of Creative Work welcome guests for individual stays from the long May weekend until the end of September. It is a perfect place not only for open air painting and photographic events, but also for art and conference meetings. 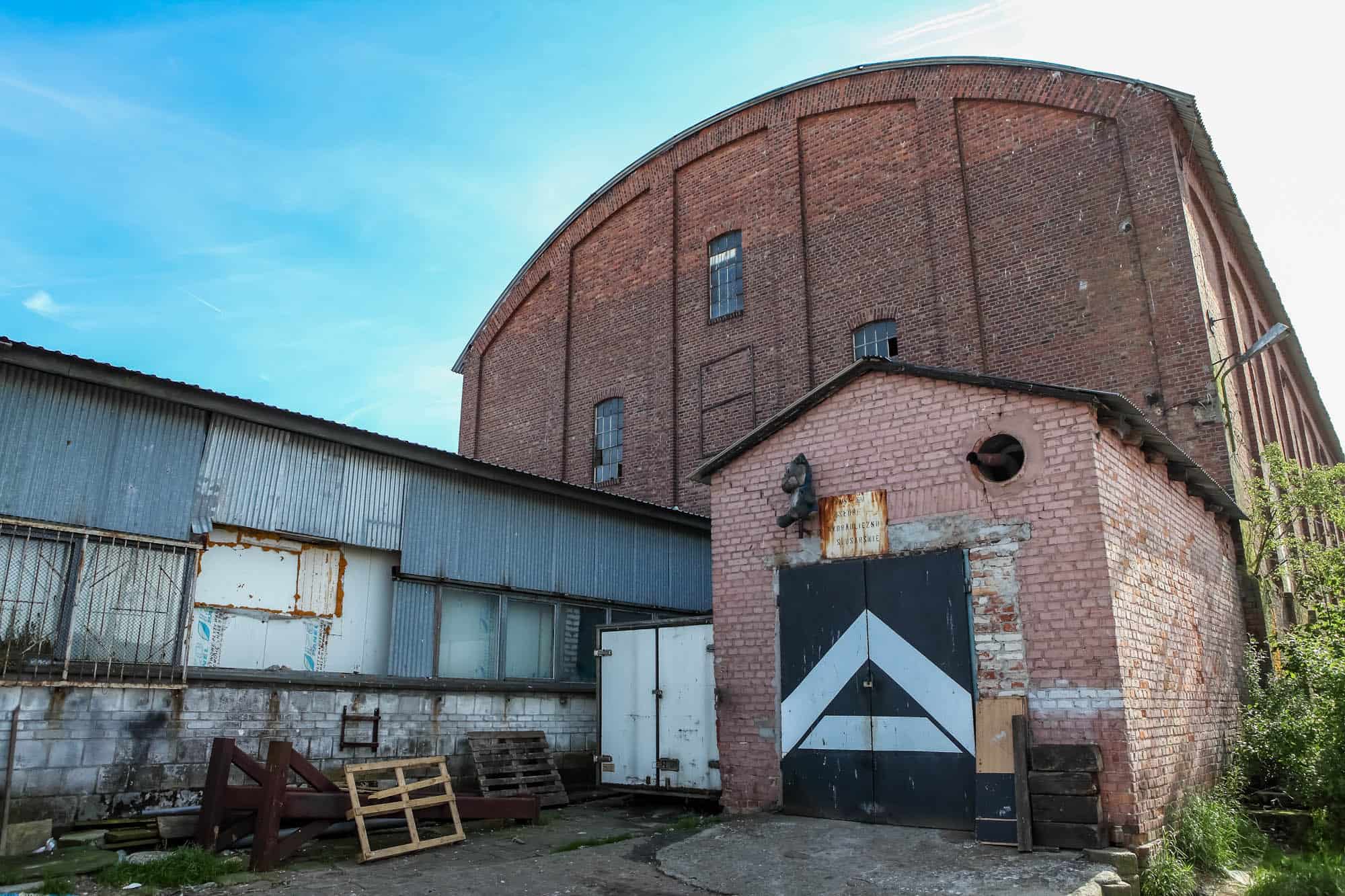 A red-brick building on the west side of the port, built in 1886. The warehouse capacity was 2.5 million liters of alcohol, which was transported here along tracks from nearby distilleries.
Apparently, in 1945, during the cleaning of the port, the bodies of three Soviet soldiers were found at the bottom of the spirit tank. This may have to do with Hitler’s order for withdrawing Germans to blow up anything that could be of use to the Russians – except for distilleries and alcohol warehouses. This was to weaken the military capabilities of the Soviet soldiers. 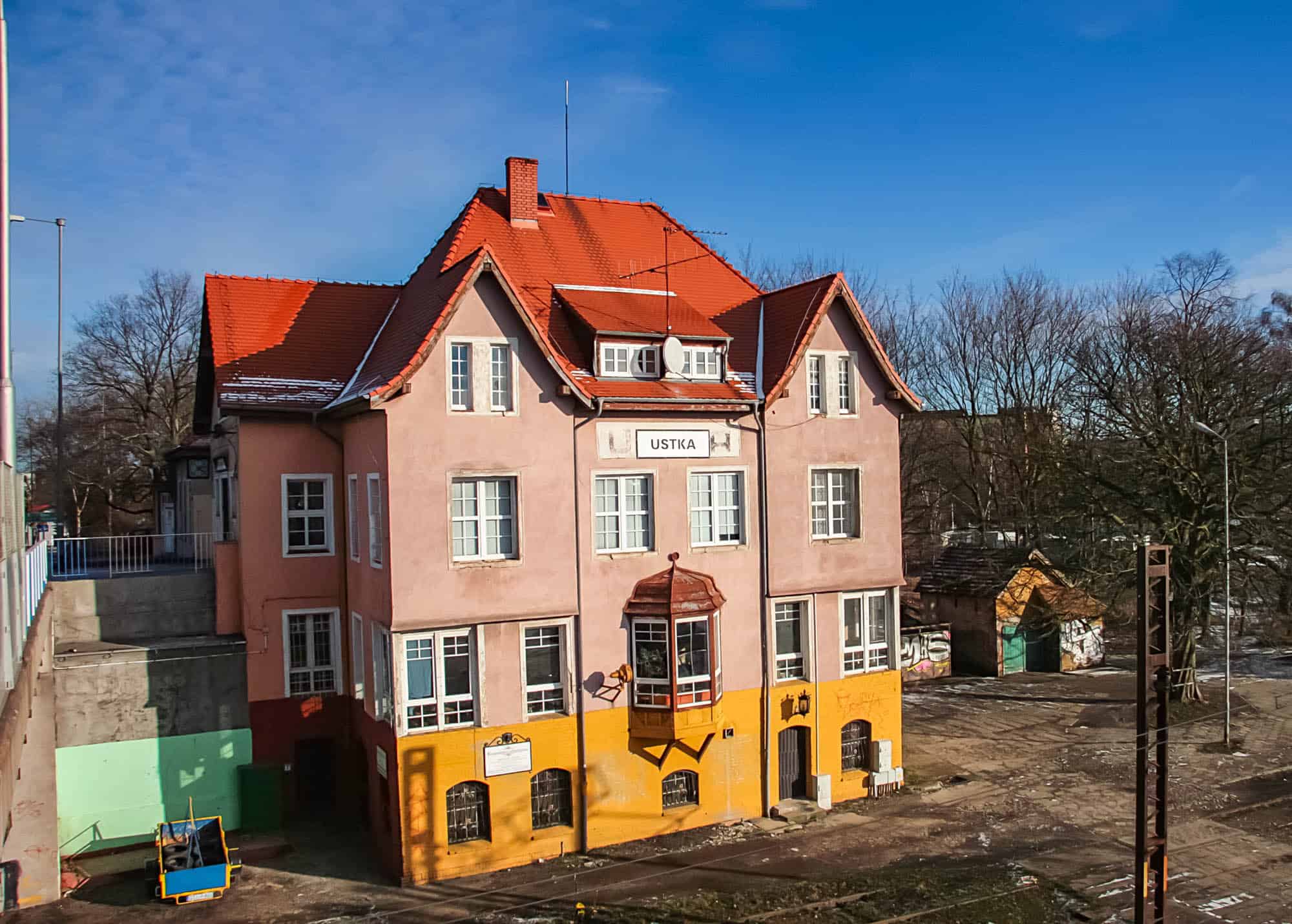 The station building was erected in 1876, when the first rail link to the resort was made. The train from Słupsk to Ustka was traveling 45 minutes at the time! Still, this was two times faster than in a horse-drawn stagecoach.

The moment when the railway tracks were brought to the town was a breakthrough for the resort. Tourists began flocking into Ustka, the railway did not keep up with handling tourist traffic, even though the train to Ustka consisted of 30 wagons! The solution has resulted in the opening of additional journeys.

Coat of Arms of Ustka

Strolling along the streets of Ustka, it is worth taking a closer look at the residential house at Kopernika 7 Street, which bears a bas-relief – Ustka’s coat of arms. The coat of arms designed by Granzow portrays a mermaid facing the front, with her bust turned towards the viewer, against the background of a three-masted sailing ship armed with cannons. The mermaid is hovering over waves symbolizing the sea and holds a salmon in her right hand. She has long, wind-blown hair and wears a crown on the head. There are fishing nets between the siren and the ship. The fact that the coat of arms depicted on the shield refers to Ustka is indicated by a banner placed on the bow of the sailor, with the inscription “STO”. It is a characteristic designation of the then cutters and fishing boats based in Ustka, an abbreviated German name of the town “Stolpmuende”.